During pandemic times, we bring you inspiring stories of exceptional socio-prenuers

Recreation and contemporization of heritage Tamil techniques by Gayathri Shaashi

“You’re an engineer. Why are you doing this?”

When Gayathri approached a master weaver to revive a weave, he pondered why a millennial with a Chennai-based IT job wanted to dabble in his doomed craft. Little did he know at only twenty-nine, Gayathri had helped revive six traditional weaves. She has also introduced contemporary techniques that breathe fresh air into stagnating weaves.

Five short years ago, Gayathri confesses an inability to distinguish a handloom sari from a powerloom. She was reselling saris bought from clueless wholesalers. Then an Instagram hashtag caught her eye: #60handloomsareepact. It encouraged women to wear handloom saris at least sixty times. Gayathri did not own a single handloom sari.

Gayathri was intrigued enough to begin researching. Traditional weaves of her native Tamil Nadu captivated her, and equally, why many were lost. Gayathri’s natural inquisitiveness and engineering background helped her understand the intricacies of each weave. She delved online to teach herself the 5000-year-old history of Indian handlooms.

The textile time travel gave Gayathri her company name: “Yatri” or Traveller. It inspired her to replace selling power loom saris with handloom. Says Gayathri, “I am guilty. Once I too was a fast fashion consumer. When I learned about handloom, I thought, enough. Everyone must do their part to save our ecosystem. One way is through handloom using natural materials.”

Gayathri's first foray was into a small weaving cluster in Chennai where a master weaver, Mr. Shekhar, was weaving with 24 different natural fibres, including pineapple, aloe vera, banana, and sisal. Although he had a unique product, his lack of social media savvy and plainness of pit-loom saris dogged his business. Gayathri helped him with social media promotion, while redesigning the plain saris to include jacquard-woven motifs and intricate borders. A batch of saris with Chikankari and Mukaish on his base of natural fibres sold out online. The success demonstrated the possibilities to Mr. Shekhar. In three years, he doubled his complement of looms, moved to a sturdier house, and now has a full order book.

That first flush of success encouraged Gayathri to reach further back into Tamil history. One weave, muslin, formed a vital trade component of the formidable 2nd BCE Chozha dynasty. This particular muslin, called Argaritic, was considered the world’s finest and coveted by Greek upper classes. Trade flourished well into the Middle Ages. Due to the subcontinent’s humid climate, spinning muslin yarn required great expertise. It was a highly prestigious occupation.

Today, Tamil Nadu’s once prized hand-spun muslin has whittled down to mere 80-count mill-spun cotton. The only two surviving Woraiyur Devanga families struggle on. Gayathri wanted to meet the weavers before they too disappeared. Gayathri learnt that only thirty years ago, a co-operative society had supported over a thousand looms along with pre-loom sizing, dyeing, and stretching. As demand dried up, desperate weavers could not afford even basic loom repair. Once revered, the looms were destroyed for firewood.

“Witnessing the weavers’ poverty cycle broke my heart,” says Gayathri. “I wanted to make a difference to their lives and add value to their golden years.”

In all conscience, Gayathri could no longer continue her original business model of reselling sarees. She started purchasing the weavers’ handloom stock directly from their weaving societies, and eventually showcased the ‘Woraiyur Cotton Saree’ in honour of the ancient muslin tradition. It was deftly woven by Thirumathy Sakkubai and Thirugyanasambantham. Profits from online sales were reinvested in projects with other clusters/karigars.

When Gayathri encounters a challenge, she cross-references a solution from earlier experiences. National award winner Mr. Selvaraj’s cotton-silk Mashru (kutni in Tamil)—traditionally a prized royal cloth—was at risk of disappearing in the current power loom climate. Recalling her work with natural fibers, Gayathri commissioned a bamboo-silk Mashru sari. Its Kanjeevaram motifs were executed using the ancient Adai technique. The result is a marriage of pedigree with cutting edge fibres. Following Gayathri’s lead, Mr. Selvaraj successfully reinvented the royal Mashru. His 30-year-old son even quit his teaching career to follow in his father’s footsteps.

Next up was Sikalnayakanpet/Thanjavur Kalamkari (literally kalam=pen; kari=art) which once outfitted kings and depicted mythical stories in temples and on festival chariots. So valued was their art that artists were bestowed with land grants to further develop their skills. When royal patronage was replaced by zamindari (landowners), kalamkari artists suffered. A few samples were shown at the British Museum in the ‘40’s to great acclaim. After Independence, the Father of Khadi, Martand Singh “Mapu”, discovered this gem and showcased it on a global scale. Responding to changing customer demand, artists started painting on plain cotton sarees. They rarely worked in silk until Gayathri approached Mr. Lakshmi Narayanan, one of two remaining kalamkari artists. She commissioned sarees in silk to be worn both ways (dual pallu concept) along with a celebrated piece that depicts elaborate forest scenes known as Vanasingaram. 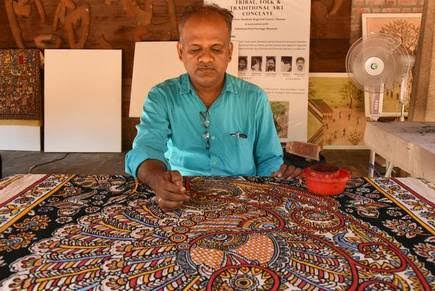 Then there’s revival and redesign of beetle wing embroidery which was in vogue until the 1850’s. It appealed to Gayathri’s inner geek, and she taught herself to select, cut, and drill through beetle wings. Gayathri has since engaged an artisan who can embroider based upon a prototype.

Alongside this project, Gayathri is creating sarees in Karunganni, Tamil Nadu’s indigenous cotton, with help from revivalist Mr. Swaminathan of Kaskom. 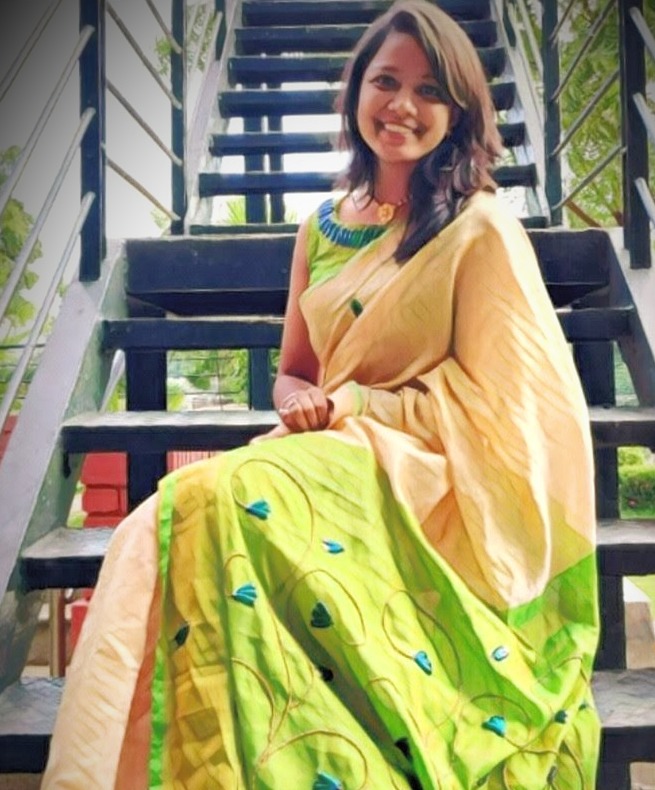 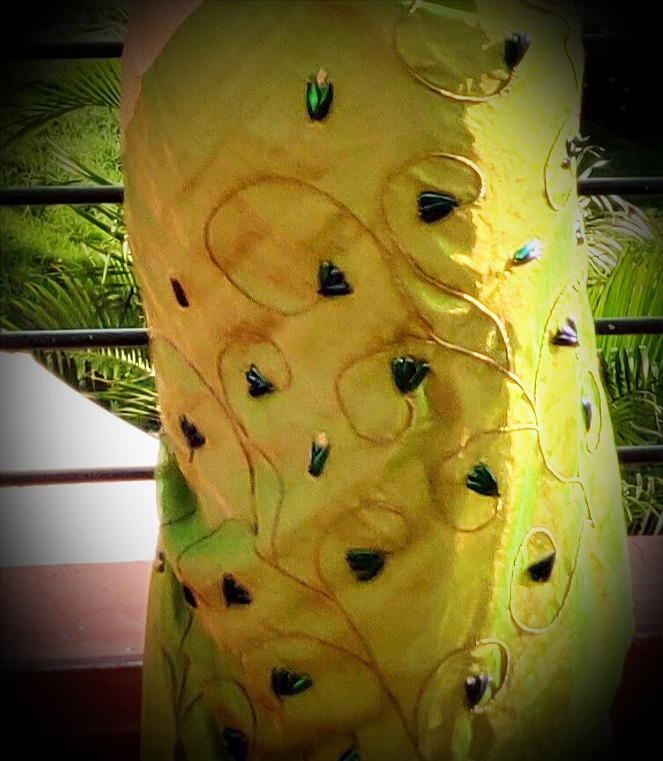 In all her projects, Gayathri is a traditionalist. She strives to keep traditional methods intact even as she pushes the boundaries of innovation. Here lies Gayathri’s main challenge: weavers have succumbed to modern methods without securing traditional knowledge. When lack of income and morale, weavers’ creativity is snuffed out and their craft spirals into near oblivion. “I attempt to break these chains with fair wages and a promise to rekindle their traditional methods. In return I’ve gained their trust.”

Another challenge in a market gorging on bling is traditional weaves’ lack of instant appeal. To counter, Gayathri raises awareness of age-old techniques and skills. The good news is Gayathri is increasingly meeting handloom enthusiasts who share her love for vintage Tamil sarees. “These weavers’ stories need to be told and draped. We need to pass on love of traditional handloom to younger generations so they will continue my humble journey.”

On the subject of competitors: “I wish I had competition. It’s healthy, spurs innovation, and is a sign of increased awareness. Currently, very few engage in reviving these weaves.”

What’s next for Yatri? “This is a lifelong commitment,” says Gayathri. “As long as I am breathing and kicking, I will create. I intend to tackle a new weave every calendar quarter. For now, my work involves prestigious, royal, and internationally acclaimed Tamil Nadu weaves. The opus is to evolve with time. And time is relative.”

So committed is Gayathri that she intends to pursue a doctorate in Handlooms. In her endeavours, she first acknowledges the weavers at whose looms she has learnt. “They are my gurus. I bow down to their dignity and ingenuity. They are dignified humans who live and work with conviction. They have refined and shaped my thoughts. To each one, I am grateful from the depths of my heart.”

Falling in love with Stepwells

Plant Hunters of the 19th Century